Steven Turnbull, Gili Trawangan’s newest Divemaster, took initiative on his last day in his temporary home of Gili Trawangan by organising a Beach Clean-Up and Dive Against Debris right on our house reef, BioRocks. Steven, a self-confessed eco-warrior, recruited several environmentally minded visitors to the island to help him on his quest. With the help of some of our instructors, it turned out to be a very successful event! Steve and his team of volunteers spent three hours cleaning the beach from our dive centre all the way to the viewing point for sunset on the island, an area of about 3km. Volunteers collected 28 bags of trash, which totalled more than 60kg in weight! Among the trash collected, plastic was the biggest problem followed by polystyrene and glass bottles.

The team then followed with an underwater Dive Against Debris at our house reef, BioRocks, where there is already a project in place to help reef restoration. BioRocks is a combination of both natural and artificial reefs powered, funded and looked after by various businesses on the island including Blue Marlin Dive. The idea is to encourage the corals to grow faster, thus maintaining a healthy living environment for the surrounding fish life. The team was pleased to report that the underwater trash situation was somewhat more positive, collecting 6 kg of rubbish from underwater in just a 53-minute dive. Again, plastic was the biggest issue: 6kgs are 6 kgs too many as far as we’re concerned.

We are proud of Steve’s achievements today and hope that he will inspire the rest of the team here at Blue Marlin Dive to be more pro-active in playing a positive role in environmental issues here on Gili Trawangan. We also look forward to his return next year to complete his PADI instructor course and get further involved in environmental projects on the island. 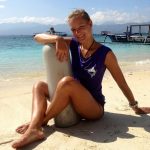